ASP.NET MVC was created by Scott Guthrie of Microsoft in 2007 based on the MVC framework implemented in different framework like Ruby on Rails, Spring etc. ASP.NET MVC (Model View Controller) is an architectural design pattern that separates an application into three main components 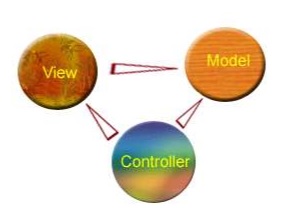 Views can be called as Presentation layer that displays the application data in the browser.

Controllers are the place where the user interactions are handled. Controller is responsible to receive the request, process the response by sending to the Model and give the response to the View again.

So in MVC, the View is only responsible to display the information. Controller is responsible for receiving request, processing it using Model and sending it back to View and Model is responsible to apply logic, connect to the database and retrieve data.