AngularJS "How to" list
78 "How to" posts
Toggle Sub Categories

How to include external file into web page using AngularJS?

Think about server side scripting language like Classic ASP, ASP.NET Web Forms or ASP.NET MVC, all had either include file or user control or partial view to make portion of code resusable and easily maintenable.

The same can be implemented here with the help of ng-include directive.

In below code snippet, we have a drop down with 2 items containing the html file path to include and ng-model set as "includeFile". This drop down also has initial value set to the first item value of the drop down value. After that we have a text box with ng-model as "MyName" and the same is being written within the paragraph.

In the last part of the code snippet, we have a <div> element with ng-include directive whose value is set to the ng-model specified in the drop down (<select>.

Now, when the drop down value changes, its model (includeFile) gets changed that reflects into ng-include directive in the last <div> that internally calls the include file based on what value is selected in the drop down.

Warning: If the file to include exists in different domain, we will not get expected functionality due to same origin policy from browser.

Below are code snippet of the include file referenced above. 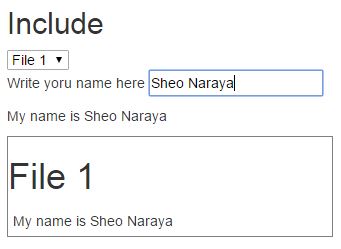